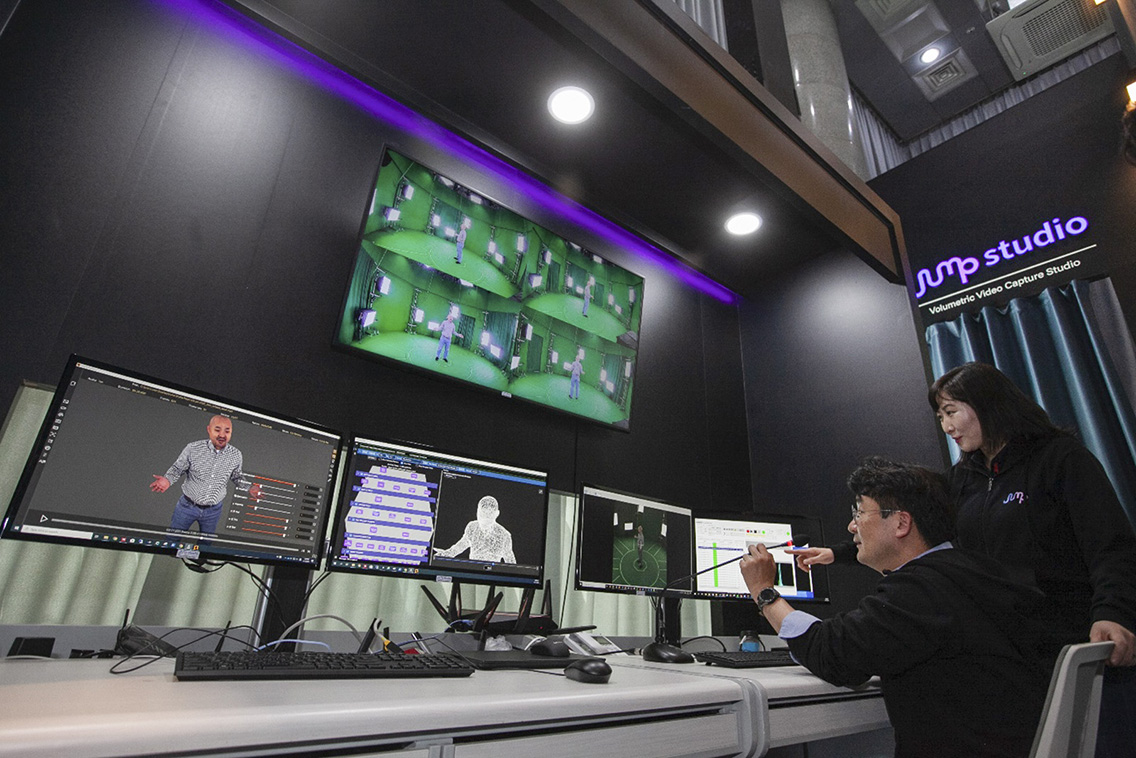 According to the Korea Institute of Science and Technology Information and Korea Creative Content Agency, the global market for mixed reality is expected to reach KRW 2.101 trillion by 2022.

Jump Studio offers the industry’s most advanced immersive media technologies. It uses Microsoft’s volumetric video capture technology to create holographic videos by shooting a person’s dynamic movements. By combining these with SK Telecom’s ‘T Real Platform,’ which is built with spatial recognition and rendering technologies, the result is highly immersive mixed reality content that can be played on most devices.

At Jump Studio, high-quality 360 degree 3D holograms are created by using 106 cameras that shoot at up to 60 frames per second (FPS). The technology can significantly reduce both time and cost needed for content production by automating the existing 3D modeling and animation process through the use of artificial intelligence (AI), 3D processing and rendering technologies.

Jump Studio also holds the power to bring immersive media content into the existing media environment.  The facility is able to compress 600 gigabytes of raw footage from a one-minute production shoot into a 300-megabyte file. The file can then be streamed to mobile devices via a MPEG-4 file.

For instance, it took about three to four months and hundreds of millions of Korean won to create a three-minute content based on existing 3D modeling techniques. With Jump Studio, the process can now be completed within just one to two weeks and at less than half the cost.

Microsoft has been drawing global attention by introducing mixed reality content in diverse areas including entertainment, movies, and games. For instance, Microsoft participated in the production of a virtual reality film ‘AWAKE’ by Start Beyond and created holograms of the movie characters. Microsoft’s mixed reality technology was also used in the performance of hologram music videos and concerts of several famous singers including Billy Corgan, the vocalist of the famous rock band The Smashing Pumpkins.

Moreover, 3D holograms can be used in countless areas. For instance, doctors will be able to use holograms of patients to study the most effective treatment; and holograms of living celebrities can be created to be kept in a museum permanently.

Through Jump Studio, SK Telecom plans to further enrich the content offerings of its media services, including Jump AR and Jump VR, SK Telecom’s immersive service platforms. Jump VR is a social VR world that can be enjoyed on both mobile and head mounted displays. Jump AR offers diverse AR services including AR Zoo where users can bring up and view a realistic the real world.

The company plans to work together with diverse businesses such as entertainment companies, production agencies, advertisement companies, fashion, health and education, games, TV and film studios. For instance, 3D avatars of idol groups can be created for performances and advertisements, as well as to make game and movie characters.

“We are thrilled to partner with SK Telecom and their newly-created Jump Studio, the first studio in Asia to license our volumetric video technology,” said Steve Sullivan, General Manager, Microsoft Mixed Reality Capture Studios.  “The Jump Studio team has impressed us with their knowledge and passion in this space, and combined with the reach and resources of SK Telecom, we believe they’ll have a huge impact in Korea and beyond.”